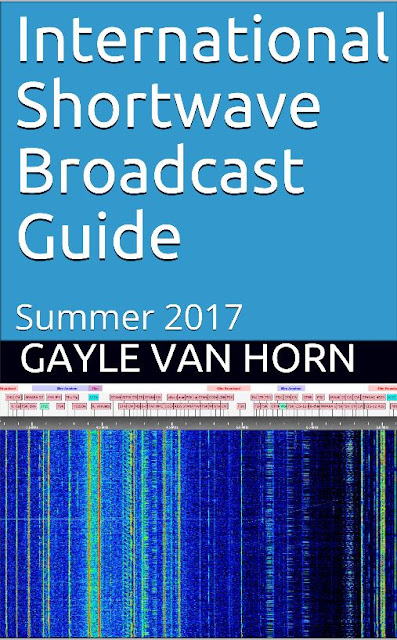 Teak Publishing is pleased to announce the release of the Summer 2017 International Shortwave Broadcast Guide (ISWBG) electronic book by Amazon bestselling author Gayle Van Horn, W4GVH. This all important semi-annual information resource is your electronic guide to the world of shortwave radio listening.


The release of this book is very timely for international radio monitors given the recent outbreak of tensions in the world hotspots of Eastern Europe, Middle East, East Asia and the Korean Peninsula.

Shortwave radio listeners are routinely entertained with unique perspectives to events, music, culture, history, and news from other countries that you won’t see or hear on your local or national broadcast channels. Shortwave radio broadcast aren’t restricted by country borders or oceans, and can propagate thousands of miles, reaching millions of listeners worldwide, in over 300 different languages and dialects. These worldwide transmissions are monitored on internationally assigned radio frequencies between 1700 kHz and 30 MHz.


There are even broadcasts from the dark side, transmitted from broadcasters known as clandestine or clanny stations. Clandestine broadcasters are wrapped in mystery and intrigue, and they usually exist to bring about some sort of political change to the country they are targeting. Programming may largely be half-truths or sometimes even outright lies, but it is essentially propaganda for their cause.


Listeners who live in the United States can easily hear shortwave broadcast stations from Canada, China, Cuba, Egypt, France, Germany, India, Iran, Japan, New Zealand, North/South Korea, Saudi Arabia, Taiwan, Turkey, United Kingdom, United States, Vietnam, and many other counties if you have an inexpensive shortwave radio receiver, and you know when and where to listen!


If you want to get in on the action, then this Amazon electronic book is your ticket the travel the world via radio. The ISWBG is our exclusive 24-hour station/frequency guide to “all” of the known longwave, selected mediumwave and shortwave radio stations currently broadcasting at time of publication. This unique radio hobby resource is the “only” radio hobby publication that has by-hour station schedules that include all language services, frequencies and world target areas.


New in this eighth edition of the ISWBG is an Surfing the Shortwave Radio Bands without a Radio by senior radio monitor Larry Van Horn Summertime Listening on Shortwave, by shortwave program specialist Fred Waterer, and a feature very timely feature - When News Breaks: Getting Your News from the Front Lines through streaming media by Loyd Van Horn.


There is also an expanded special feature on Who’s Who in the shortwave radio spectrum by former Monitoring Times editor and feature writer Larry Van Horn N5FPW. This story covers services and frequencies outside the regular broadcast and amateur radio bands, and includes our new, exclusive Hot HF 1000+ non-broadcast frequency list. The final feature article in this edition is Getting Started in Shortwave Radio, a primer, by Spectrum Monitor managing editor Ken Reitz KS4ZR.


The price for this latest edition is still US$7.99. Since this book is being released internationally, Amazon customers in the United Kingdom, Germany, France Spain, Italy, Japan, India, Canada, Brazil, Mexico and Australia can order this electronic book (e-Book) from Amazon websites directly servicing these countries. All other countries can use the regular Amazon.com website.


This new e-publication edition is a much expanded version of the English shortwave broadcast guide that was formerly published in the pages of the former Monitoring Times magazine for well over 20 years. This one of a kind e-book is published twice a year to correspond with shortwave station’s seasonal time and frequency changes.


Don’t own a Kindle reader from Amazon? Not a problem. You do not need to own a Kindle to read Amazon e-book publications. You can read any Kindle book with Amazon’s free reading apps on literally any electronic media platform.


The Kindle app is available for most major smartphones, tablets and computers. There is a Kindle app available for the iPad, iPhone, and iPod touch; Android Phone; Android Tablet; PC; Windows 8; Mac Kindle Cloud Reader; Windows Phone; Samsung; BlackBerry 10; BlackBerry; amd WebOS. This means with a free Kindle reading apps, you can buy a Kindle book once, and read it on any device with the Kindle app installed*. You can also read that same Kindle book on a Kindle device if you own one.


You can find additional details on these apps by checking out this link to the Amazon website at www.amazon.com/gp/feature.html?ie=UTF8&docId=1000493771.


For additional information on this and other Teak Publishing radio hobby books, monitor the company sponsored Internet blogs – The Military Monitoring Post (http://mt-milcom.blogspot.com/), The Btown Monitor Post (http://monitor-post.blogspot.com/) and The Shortwave Central (http://mt-shortwave.blogspot.com/) for availability of additional e-books that are currently in production. You can learn more about the author by going to her author page on Amazon at http://www.amazon.com/Gayle-Van-Horn/e/B0084MVQCM/.


The International Shortwave Broadcast Guide will have wide appeal to shortwave radio hobbyists, amateur radio operators, educators, foreign language students, news agencies, news buffs, or anyone interested in listening to a global view of news and major events as they happen.


Whether you are an amateur radio operator or shortwave radio enthusiasts, and want to get in on the action outside of the ham bands, then this new electronic book from Teak Publishing is a must in your radio reference library.