Chantal Forms in the Atlantic 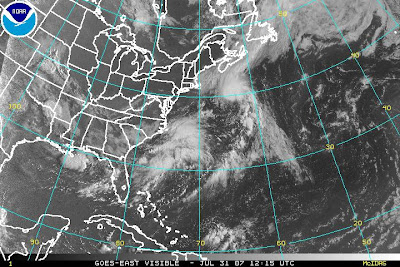 Elsewhere in the tropical atlantic :-

There is a low pressure area in the Atlantic near the windward islands that could also become a tropical depression in the next day or so. This area is moving to the west at 15 mph, and is showing signs of strengthening. We'll have to keep our eye on that one as well. If this were to become a tropical storm, it would be named Dean.
Posted by Larry at 7/31/2007 07:41:00 AM

WASHINGTON - The Department of Defense, Department of Commerce, and the National Aeronautics and Space Administration announced today that they have restructured the National Polar-orbiting Operational Environmental Satellite System (NPOESS). This $ 4.2 billion modification of the Northrop Grumman Space Technology contract culminates a rigorous year long effort to re-plan virtually every aspect of the NPOESS program following its certification through the Nunn McCurdy process in 2006. The plan details the development and delivery of the system through initial production in the next decade.

This extensive re-planning was a joint effort between the three agencies, which comprise the NPOESS Integrated Program Office and Northrop Grumman Space Technology. The schedule delivers sensors to the NPOESS Preparatory Project to support a 2009 launch, and calls for the launch of the first NPOESS satellite in 2013.

The restructured contract puts in place a "back to basics" approach with management controls and reporting requirements which will ensure strict oversight of the contractor. The fee structure is now more objective through the inclusion of incentives for cost, schedule and technical performance.

"This is the most extensive and rigorous planning process I have ever witnessed," said Gary Davis, the Program Executive Officer for Environmental Satellites. "This restructured program will provide the meteorological community with the exceptional performance that they require to maintain the quality forecasting capability that the American public has come to expect."

NPOESS maintains the capability to restore sensors that were removed during the Nunn-McCurdy process, through sponsorship and cooperative agreements. The program has also been restructured to allow sufficient time for integration of the de-manifested sensors.

Northrop Grumman Space Technology, Redondo Beach, Calif., is being awarded a cost-plus-award-fee with multiple incentives contract modification for $2,346,892,272. The $4.2 billion includes residual value on the contract.

Sensors manifested on NPOESS and the NPOESS Preparatory Project include:

· Ozone Mapping and Profiler Suite (OMPS-Nadir and Limb). Collects data to permit the calculation of the vertical and horizontal distribution of ozone in the Earth's atmosphere. (NPP will fly nadir and limb; NPOESS will fly nadir only)

· Data Collection System (A-DCS). Measures environmental factors such as atmospheric temperature and pressure and the velocity and direction of the ocean and wind currents.

· Clouds and the Earth's Radiant Energy System (CERES). Measures both solar-reflected and Earth-emitted radiation from the top of the atmosphere to the Earth's surface.

· Space Environment Monitor (SEM). Measures the near-Earth space environment in terms of neutral and charged particles, electron and magnetic fields.
Posted by Larry at 7/31/2007 06:30:00 AM

Japan HiRID and WEFAX to be Discontinued

The Japan Meteorological Agency (JMA) has been providing HiRID (compatible with S-VISSR) and WEFAX imagery along with new HRIT and LRIT imagery via MTSAT-1R as transition measures for users of S-VISSR and/or WEFAX imagery since commencing the operational service of MTSAT-1R in June 2005.

JMA has finalized the date of ending the HiRID/WEFAX broadcasting service, date which has been announced in previous news releases (1 and 2). JMA will be ending the HiRID/WEFAX broadcast service at 0230UTC on 12 March 2008 with the broadcast of imagery at 0200UTC. Please note that, after the date, only HRIT and LRIT imagery will be available in accordance with the new timetable for MTSAT-1R direct broadcast.

JMA recommends HiRID/WEFAX users who will continue to use MTSAT-1R imagery contacting the manufacturer of the current receiving equipment.

And Kristian via UDXF passes along the link below to the latest JMH Tokyo Meteo FAX pdf sked on the net.