The R3 (Strong) Radio Blackout today at 12:49 EDT (1649 UTC) was accompanied by an earth-directed CME. Hampered by limited observations of the event, SWPC forecasters are now anticipating the passage of the [coronal mass ejection] around 1:00 a.m. EDT, Saturday, July 14. G1 (minor) Geomagnetic Storm activity is expected to then ensue through the rest of the day.

In short, NOAA is predicting minor effects from this space weather event - no major impacts on the power grid or satellites anticipated - although we remind you forecasting space weather is difficult and surprises are possible. Sky watchers in northern U.S. (and high latitudes) may have an opportunity to see aurora late Friday night into early Saturday morning.

X-FLARE! Big sunspot AR1520 unleashed an X1.4-class solar flare on July 12th at 1653 UT. Because the sunspot was directly facing Earth at the time of the blast, this is a geoeffective event. Stay tuned for updates about possible CMEs and radio blackouts.
NASA's Solar Dynamics Observatory recorded a flash of extreme ultraviolet radiation from the blast site. 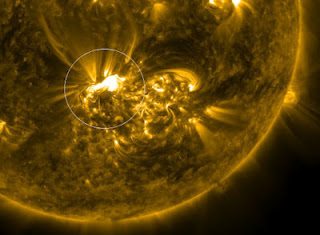 The UV and X-ray pulse from the flare will have partially ionized Earth's upper atmosphere on the dayside of our planet, disturbing the normal propagation of radio signals. Watch the Realtime Space Weather Gallery for possible reports of sudden ionospheric disturbances and other effects.
Posted by Larry at 7/12/2012 03:44:00 PM

There is this report from the Canada Free Press by: Doug Hagmann & Joseph Hagmann

In the event you missed the Friday news dump, Barack Hussein Obama issued yet another executive order. Titled “Assignment of National Security and Emergency Preparedness Communications Functions,” it may be read in its entirety on the White House website here. At first blush, it appears that the order modernizes previous communications functionality, particularly as it relates to the continuity of governmental communication during wartime or national crisis as defined by Obama.

The text of the order itself consists of 2,205 words and seven-(7) sections and multiple subsections. The policy statement (section one) seems innocuous and actually beneficial to the continuity of communications within the U.S., until one begins to dissect the order and consider it in context with other Obama issued directives. Extensive analysis of this order, in tandem with other recent Obama orders and signed legislation, suggests a disconcerting pattern of potential overreach by Obama into the area of normal and customary commercial communication systems.

Based on our analysis of this order, it would appear that the implementation of emergency communications by Obama, using all forms of wired and wireless communication systems, is redirected through the Executive branch and could expand such takeover abilities beyond the limits of an actual act of war, national emergency, or other event impacting the national security of the U.S. The order also mandates that the Department of Homeland Security develops and submits such a plan to Obama within sixty-(60) days of this order (section 5.2(h)).

You can read the entire Executive Order at
http://www.whitehouse.gov/the-press-office/2012/07/06/executive-order-assignment-national-security-and-emergency-preparedness-
Posted by Larry at 7/09/2012 05:34:00 AM

If you think you know all there is to know about the U.S. government and its various federal agencies, think again. The government that we knew prior to 9/11 has changed dramatically since that faithful day in 2001.

For instance, it has been interesting to stand on the edges and see changes in military communications since that day. We have seen a major overhaul in the VHF/UHF spectrum subbands that is used by the DoD. The 225-400 MHz bandplan from several years ago is not what we observe today.

If you would like to learn more about the hidden world of our government, I highly recommend you visit the Washington Post website and read the online article - Top Secret America- A hidden world, growing beyond control by Dana Priest and William M. Arkin.

Priest and Arkin conducted a two-year investigation for The Washington Post that discovered what amounts to an alternative geography of the United States, a Top Secret America hidden from public view and lacking in thorough oversight. After nine years of unprecedented spending and growth, the result is that the system put in place to keep the United States safe is so massive that its effectiveness is impossible to determine.

The investigation's other findings include:

* Some 1,271 government organizations and 1,931 private companies work on programs related to counterterrorism, homeland security and intelligence in about 10,000 locations across the United States.

* In Washington and the surrounding area, 33 building complexes for top-secret intelligence work are under construction or have been built since September 2001. Together they occupy the equivalent of almost three Pentagons or 22 U.S. Capitol buildings - about 17 million square feet of space.

* Many security and intelligence agencies do the same work, creating redundancy and waste. For example, 51 federal organizations and military commands, operating in 15 U.S. cities, track the flow of money to and from terrorist networks.

* Analysts who make sense of documents and conversations obtained by foreign and domestic spying share their judgment by publishing 50,000 intelligence reports each year - a volume so large that many are routinely ignored.

I will have more on this from a monitors point of view in an upcoming issue of Monitoring Times magazine in my monthly Milcom column.
Posted by Larry at 7/06/2012 08:26:00 AM