By this Public Notice, the Wireless Telecommunications Bureau (Bureau) announces that the Universal Licensing System (ULS) is now ready to accept applications for
new or modified aeronautical enroute and flight test stations for authorization to operate with 8.33 kilohertz channel spacing, and applications to assign or transfer aircraft station licenses. These changes were made to implement rules adopted by the Commission in the Third Report and Order in WT Docket No. 01-289.

It concluded that the permissive introduction of 8.33 kilohertz channel spacing in the aeronautical enroute service would provide the aviation industry with the ability to greatly enhance spectrum efficiency and alleviate congestion, while avoiding the imposition of the significant compliance burdens that could result from a mandatory narrowbanding transition. It also concluded that narrowbanding would benefit flight test stations, which likewise face increasing frequency congestion in U.S. airspace. The Commission directed the Bureau to issue a public notice to alert applicants when the Bureau was ready to begin accepting applications for 8.33 kilohertz channel spacing.

The Aug 9, 2011 eruption on the Sun that produced a X-7 class flare caused a temporary blackout of high frequency radio transmissions on the side of Earth covered in daylight. Navigation signals can be degraded in these instances. Credit: NASA/SDO/SOHO/Music: John Serrie 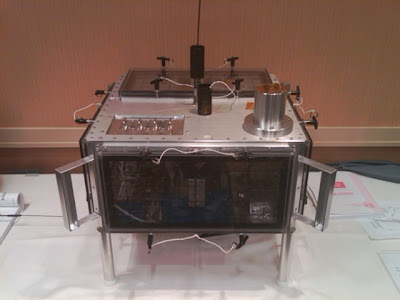 According to US Mission Control in Houston, ARISSat-1 was supposed to have two antennas -- one 70 cm antenna and one 2 meter antenna -- but Volkov and Samokutyaev expressed concern when they saw only one antenna. After discussions between the cosmonauts, the payload manager and the ground teams in Houston and Moscow, it was decided to delay the deployment. At the time, it was uncertain if the satellite would even be deployed during this spacewalk. If ARISSat-1 was not deployed during today's spacewalk, the next opportunity for its deployment would be February 2012. "Instead of taking chances on the satellite not working properly once deployed, it has been decided to secure it for the time being," US Mission Control reported when the decision to delay was made.

After much consultation, Mission Control in Moscow told the cosmonauts that they were going to go ahead and deploy the satellite. At 1843 UTC, Volkov jettisoned ARISSat-1 from his position on the Pirs docking compartment on the ISS.

The loss of the UHF antenna means that the 435 MHz/145 MHz linear transponder may not be operational. According to US Mission Control, it can also mean that there may be loss in the data that can be downloaded from ARISSat-1, as well as a loss of control capability from the ground. Even so, radio amateurs will be able to copy voice, BPSK and SSTV messages.

According to ARISSat-1/KEDR Project Manager Gould Smith, WA4SXM, ARISSat-1 will be in high power mode (continuous transmission) when in the Sun. It will go into low power (intermittent) mode when in eclipse.

ARISSat-1 will be active on the following frequencies and modes:

* 145.950 MHz FM Downlink: FM transmissions will cycle between a voice ID as RS01S, select telemetry values, 24 international greeting messages in 15 languages, as well as SSTV images. If you successfully receive the SSTV transmissions, you are invited to upload your picture to the ARISS SSTV Gallery at, http://www.amsat.org/amsat/ariss/SSTV/.

* 435 MHz - 145 MHz Linear Transponder: The linear transponder will operate in Mode U/V (70 cm up, 2 meters down). It is a 16 kHz wide inverting passband and the convention will be to transmit LSB on the 435 MHz uplink and receive USB on the 145 MHz downlink.

AMSAT needs your telemetry from ARISSat-1/KEDR after deployment from the International Space Station. Since there are no "Whole Orbit Data" storage mechanisms onboard ARISSat-1/KEDR, listener submissions are the only way for AMSAT to collect the spacecraft telemetry and KURSK experiment results. Here's how you can help:

* Recorded ARISSat-1/KEDR and Kursk telemetry CSV files (in the ARISSatTLM folder) can be sent as via e-mail as an attachment to, telemetry@arissattlm.org.

* If you are running ARISSatTLM and receiving the signal "live" from ARISSat-1/KEDR, please enable the telemetry forwarding option.

* The latest telemetry can be seen live on your computer or cell phone at, http://www.arissattlm.org/mobile.

AMSAT has also posted an ARISSat-1/KEDR "How To" page on their
website with pointers concerning digital aspects, such as BPSK
telemetry reception, SSTV reception and more. The web site is,
http://www.amsat.org/amsat-new/ARISSat/ARISSatHowTo.php.

On this spacewalk, Volkov and Samokutyaev also installed laser
communications equipment and replaced experiments on the Zvezda
service module and retrieved a rendezvous antenna. They were unable
to perform the major job of the spacewalk -- relocating a boom
structure to aid future spacewalks -- due to time constraints. This
spacewalk was the third for Volkov, who performed two spacewalks as
Expedition 17 commander in 2008. This was the first spacewalk for
Samokutyaev.
Posted by Larry at 8/04/2011 10:14:00 AM