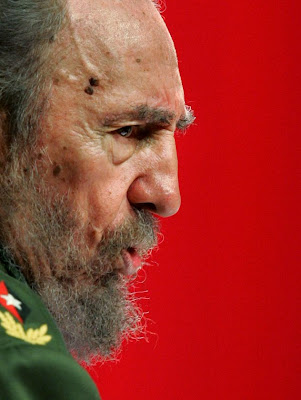 You can monitor the latest developments (Spanish only) online at:

You can get the latest shortwave radio frequencies to monitor this story on our sister blog -- the Shortwave Central at http://mt-shortwave.blogspot.com/2008/02/hot-spot-dxing-cuba-castro-resigns.html
Posted by Larry at 2/19/2008 06:57:00 AM

I will be the first to admit I am a bit of an audio freak and the Internet gives me the ability to monitor communications from around the world that I would not normally hear. Case in point - Australia Public Safety communications.

Point your browser to http://www.moretondiver.com/livescannerfeed.html for public safety comms with a G'Day twist.

Aviation Week and Space Technology is reporting in an online article by Michael A. Taverna/Aerospace Daily & Defense Report, that the Rascom-QAF1 satellite will not operate the full 15 years service life as planned.

Thales Alenia Space says engineers have managed to place the Rascom-QAF1 satellite in final orbit, following a helium leak that occurred after its late December launch, but at the cost of a sharply reduced lifetime.

However, barring further steps, satellite life will be barely more than two years, instead of the 15 years initially planned. Nevertheless, this could be enough for operator RascomStar-QAF to order a replacement satellite.
Posted by Larry at 2/08/2008 10:21:00 AM

The Beatles Will Be Beaming to Polaris the North Star 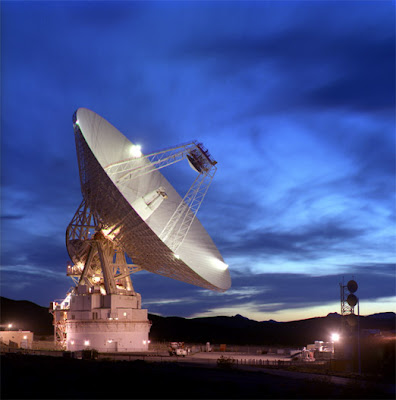 WASHINGTON -- For the first time ever, NASA will beam a song -- The Beatles' "Across the Universe" -- directly into deep space at 7 p.m. EST on Feb. 4.

The transmission over NASA's Deep Space Network will commemorate the 40th anniversary of the day The Beatles recorded the song, as well as the 50th anniversary of NASA's founding and the group's beginnings. Two other anniversaries also are being honored: The launch 50 years ago this week of Explorer 1, the first U.S. satellite, and the founding 45 years ago of the Deep Space Network, an international network of antennas that supports missions to explore the universe.

The transmission is being aimed at the North Star, Polaris, which is located 431 light years away from Earth. The song will travel across the universe at a speed of 186,000 miles per second. Former Beatle Sir Paul McCartney expressed excitement that the tune, which was principally written by fellow Beatle John Lennon, was being beamed into the cosmos.

"Amazing! Well done, NASA!" McCartney said in a message to the space agency. "Send my love to the aliens. All the best, Paul."

"I see that this is the beginning of the new age in which we will communicate with billions of planets across the universe," she said.

It is not the first time Beatles music has been used by NASA; in November 2005, McCartney performed the song "Good Day Sunshine" during a concert that was transmitted to the International Space Station. "Here Comes the Sun," "Ticket to Ride" and "A Hard Day's Night" are among other Beatles' songs that have been played to wake astronaut crews in orbit.

Feb. 4 has been declared "Across The Universe Day" by Beatles fans to commemorate the anniversaries. As part of the celebration, the public around the world has been invited to participate in the event by simultaneously playing the song at the same time it is transmitted by NASA. Many of the senior NASA scientists and engineers involved in the effort are among the group's biggest fans.

"I've been a Beatles fan for 45 years – as long as the Deep Space Network has been around," said Dr. Barry Geldzahler, the network's program executive at NASA Headquarters, Washington. "What a joy, especially considering that 'Across the Universe' is my personal favorite Beatles song."

Monitor the Airspace at Superbowl XLII this Weekend 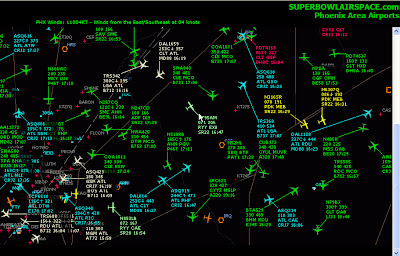 Are you are interested in hearing the coming and goings of aircraft in and around the SuperBowl in the Phoenix area this weekend? If the answer is yes then I have a neat online service for you (and it is free).

Now you can monitor Phoenix Approach/Departure Control communications and view their radar screen of air fraffic in the area via the Internet.

This service is courtesy of LiveATC.net and SquawkVFR. Point that browser at
http://atcmonitor.com/superbowl/superbowlairspace.html and get in on all the action.
Be sure to tell them that the Milcom and Btown Monitoring Post sent ya.
Posted by Larry at 2/02/2008 10:00:00 AM