From ARRL Newsleter: FT8 Activity Bumping Up at Some Expense to Other Modes

Despite largely dismal HF conditions, there is no doubt that the recent FT8 digital protocol has hams on the air. The mode has caught on so quickly that co-developer Joe Taylor expressed surprise last fall at the rapid uptake of FT8 for making contacts on HF bands Judging by Logbook of The World (LoTW) data, more than 2.3 million FT8 contacts were uploaded in 1 month -- a net gain of 1.2 million contacts on all modes over the same month last year, ARRL Radiosport Manager Norm Fusaro, W3IZ, said. Over the same period, activity in some of the other modes has declined.

China's Amateur Radio Satellite organization, CAMSAT, has released some details of three new Amateur Radio satellites that could be launched as early as September. Two of the satellites, CAS-5A and CAS-6, will carry transponders, and one of them will have HF capability.

The tiny CAS-5B, weighing 1/2 kilogram, will be deployed from CAS-5A in orbit. It will carry a UHF CW beacon on an Amateur Radio frequency. It will be placed into a 539 x 533 kilometer, 97.5-degree orbit.

CAS-5A/B will launch from the Jiuquan Satellite Launch Center.

CAS-6, a 50-kilogram microsat, will include a VHF CW telemetry beacon; a U/V mode 20 kHz linear transponder, and AX.25 4,800-baud GMSK telemetry downlink. It will also carry an atmospheric wind detector and other systems that will operate on non-amateur frequencies.

A launch at sea is planned for CAS-6 from the China Academy of Launch Vehicle Technology. The microsat will be placed into a 579 x 579 kilometer, 45-degree orbit.

CAMSAT has applied to the International Amateur Radio Union (IARU) to coordinate frequencies for all three spacecraft.

The Japan Aerospace Exploration Agency (JAXA) has announced that three CubeSats carrying Amateur Radio payloads, including one with a V/U linear transponder, were deployed from the International Space Station (ISS) on May 11 at around 1030 UTC. 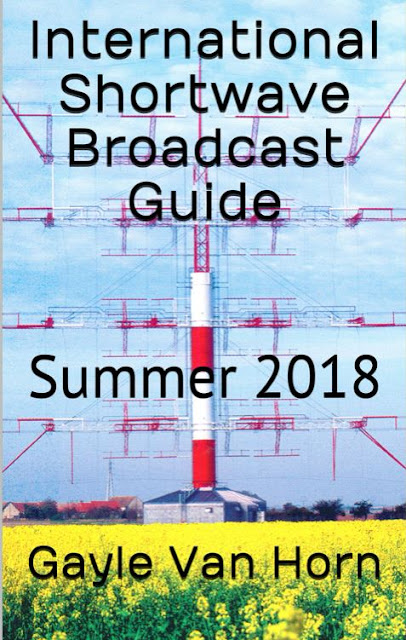 Older ham radio operators and radio listeners might remember a time when shortwave radio stations broadcast a nearly constant drumbeat of political propaganda during the Cold War years. Shortwave radio stations such as Radio Moscow, the Voice of America, and the BBC, to name a few, played an important ideological role during that confrontation between the East and the West.

Once again, Global Radio broadcasters have moved to the front lines at what is now shaping up as a new Cold War by some of the world’s major super powers. As tensions heat up in the world’s hotspots such as eastern Europe, the Middle East and Eastern Asia, you can follow breaking international events on the radio waves, but you need an accurate and comprehensive guide to broadcast frequencies to hear it.

If you want to get in on the action, then this Amazon electronic book is your ticket to travel the Global Radio bands. The ISWBG is an exclusive 24-hour station/frequency guide with schedules for selected mediumwave broadcasters and all known longwave/shortwave radio stations transmitting at time of publication. This unique resource is the only radio publication that has by-hour schedules that includes all language services, frequencies and world target areas for over 500 stations. It has a complete listing of DX radio programs and Internet websites addresses for many of the stations listed in the book. There are also listings for standard time and frequency stations, and even a few intriguing spy numbers station listings.

New in this 10th edition of the ISWBG is a feature, Monitoring Brazil on Shortwave Radio. It is more than futebol! by Gayle Van Horn. Soccer teams from around the world will compete this summer in the FIFA World Cup, and Brazil is expected to be a top contender to win the event. This article will aid you in monitoring broadcasters that will be carrying Brazilian soccer team news during this international event.

Other authors with articles in this edition include The Spectrum Monitor’s Fred Waterer, with a feature on summer radio programming, and Hans Johnson with a profile on the state of DRM broadcasting in 2018. There are also two First Look reviews on the new AirSpy HF+ SDR and the W6LVP Magnetic Loop Antenna by Loyd Van Horn W4LVH.

Spectrum Monitor e-zine columnist/feature writer Larry Van Horn N5FPW has a special feature on Who’s Who in the Shortwave Radio Spectrum that will assist the reader in monitoring Global Radio activity outside the broadcast radio spectrum. This article also includes an update to the Teak Publishing HF 1000+ non-broadcast frequency list.

The price for this latest edition is still US$7.99. Since this book is being released internationally, Amazon customers in the United Kingdom, Germany, France Spain, Italy, Japan, India, Canada, Brazil, Mexico and Australia can order this electronic book (e-Book) from Amazon websites directly servicing these countries. All other countries can use the regular Amazon.com website.
Don’t own a Kindle reader from Amazon? Not a problem. You do not need to own a Kindle to read Amazon e-book publications. You can read any Kindle book with Amazon’s free reading apps on literally any electronic media platform.

A Kindle app is available for most major smartphones, tablets and computers. There is a Kindle app available for the iPad, iPhone, and iPod touch; Android Phone; Android Tablet; PC; Windows 8; Mac Kindle Cloud Reader; Windows Phone; Samsung; BlackBerry 10; BlackBerry; and WebOS. This means with a free Kindle reading apps, you can buy a Kindle book once, and read it on any device with the Kindle app installed*. You can also read that same Kindle book on a Kindle device if you own one.

You can find additional details on these apps by checking out this link to the Amazon website at www.amazon.com/gp/feature.html?ie=UTF8&docId=1000493771.

For additional information on this and other Teak Publishing radio hobby books, monitor the company sponsored Internet blogs – The Military Monitoring Post (http://mt-milcom.blogspot.com/), The Btown Monitor Post (http://monitor-post.blogspot.com/) and The Shortwave Central (http://mt-shortwave.blogspot.com/) for availability of additional e-books that are currently in production. You can learn more about the author by going to her author page on Amazon at http://www.amazon.com/Gayle-Van-Horn/e/B0084MVQCM/.

Global Radio listeners are routinely entertained with unique perspectives to events, music, culture, history, and news from other countries that you won’t see or hear on your local or national broadcast channels. Global Radio broadcasts are not restricted by country borders or oceans, and can travel thousands of miles, reaching millions of listeners worldwide, now in over 300 different languages and dialects.

Listeners can easily hear shortwave broadcast stations from China, Cuba, Egypt, France, Germany, India, Iran, Japan, New Zealand, North/South Korea, Saudi Arabia, Taiwan, Turkey, United Kingdom, United States, Vietnam, and many other counties. If you have a shortwave radio receiver or Internet connection, and this unique radio resource, you will know when and where to listen to your favorite radio broadcast station.

The International Shortwave Broadcast Guide will have wide appeal to amateur radio operators, shortwave radio hobbyists, news agencies, news buffs, educators, foreign language students, expatriates, or anyone else interested in listening to a global view of world news and major events as they happen.

Whether you are an amateur radio operator or shortwave radio enthusiasts and want to get in on the action outside of the ham bands, then this new electronic book from Teak Publishing is a must in your radio reference library.