The next International Space Station crew plus the first female civilian visitor to the ISS lifted off from Kazakhstan early September 18. NASA astronaut and Expedition 14 crew commander Michael Lopez-Alegria, KE5GTK, and Russian cosmonaut Mikhail Tyurin, RZ3FT, will take over for the Expedition 13 crew of astronaut Jeff Williams, KD5TVQ, and cosmonaut Pavel Vinogradov, RV3B. Along for the ride as a paying passenger aboard the Soyuz TMA-9 "taxi flight" is US business woman Anousheh Ansari, who will visit the ISS for about 10 days under a contract with the Russian Federal Space Agency.

The Soyuz rocket carrying Expedition 14 and Ansari took off from Baikonur Cosmodrome. The trio should arrive at the space station early on September 20. This will mark Tyurin's second time as a space station crew member. He was part of ISS Expedition 3 in 2001.

Remaining onboard the ISS for part of Expedition 14 will be European Space Agency astronaut Thomas Reiter, DF4TR. The Amateur Radio on the International Space Station (ARISS) program says Ansari, 39, will attempt some Amateur Radio contacts during her stay in space. A tentative schedule calls for her to speak with students at George Washington University, her alma mater, on Friday, September 22. Jeff Williams will serve as a control operator for that event. In addition, ARRL ARISS Liaison Rosalie White, K1STO, says Ansari wants to speak with US-licensed school children in random QSOs. Using the RS0ISS call sign, Ansari is expected to be on the air at various times from Thursday, September 21, until Tuesday, September 26. The worldwide downlink frequency is 145.800 MHz. The FM voice uplink is 144.490 MHz in ITU Regions 2 and 3 (the Americas and the Pacific) and 145.200 MHz in Region 1 (Europe, Central Asia and Africa). Ansari, who's standing in for Daisuke "Dice-K" Enomoto as the fourth private citizen to fly to the ISS, has been trained in use of the ARISS gear but was unable to get her license because of her accelerated training schedule.

Hydraulic malfunction faulted in CubeSat launch failure: The commission probing the July 26 Dnepr-1LV rocket launch vehicle failure that resulted in the loss of more than a dozen CubeSats with ham radio payloads believes it knows why the vehicle didn't reach orbit.

A brief malfunction of a hydraulic drive in a first-stage propulsion unit caused a deviation in the rocket's trajectory and "the issuance of a command to abort the flight," said a news release from Kosmotras, the company responsible for the rocket's launch. Kosmotras said the cause of the hydraulic malfunction has been determined, and the committee is "working up recommendations for its rectification." Russia, meanwhile, has suspended further Dnepr-1 LV launches.

Fourteen of the tiny spacecraft that were lost carried Amateur Radio VHF or UHF beacon or telemetry transmitters. Various accounts indicated that the mission went awry less than two minutes after liftoff. The CubeSat project was a collaboration between California Polytechnic State University-San Luis Obispo and Stanford University's Space Systems Development Laboratory. All of the CubeSats were designed and built by students at various universities around the world.--some information from AMSAT News Service.

As the so-called "Firedragon" jammer continues to transmit in one or more Amateur Radio bands, the International Amateur Radio Union (IARU) and three of its Region 3 member-societies so far have appealed to the jammer's target to move elsewhere. The Firedragon's all-music transmissions from thePeople's Republic of China (PRC) appear aimed at blocking the much-weaker broadcasts of the clandestine "Sound of Hope" (SOH), located outside the PRC.

Responding via e-mail September 5 to an inquiry from IARU Region 1 Monitoring System (IARUMS) Vice Coordinator Uli Bihlmayer, DJ9KR, the SOH said its supporters use various avenues "including Amateur Radio frequencies" to get their message into the PRC.

"Through our investigation, we learned that the transmissions of SOH programs through Amateur Radio frequencies come from areas around China, and they each only target a local area of China with very low power, only for the intended audience and would interfere with nobody else," said SOH's Yue Chen. Yue addressed the reply to "All Amateur Radio Community Members" and indicated it was copied to the International Telecommunication Union (ITU), although no ITU addressee was displayed. Yue encouraged the Amateur Radiocommunity to "openly urge the Chinese government to stop this outrageous act of radio jamming" and to urge the ITU to take action as well.

Wireless Institute of Australia (WIA) Director Glenn Dunstan, VK4DU, told the Sound of Hope via e-mail this week that if it wants the support of the international community, it should move its transmissions into legitimate broadcasting spectrum."There is more than enough radio spectrum for you to use outside of the Amateur Radio bands," Dunstan said September 5. "You are in breach ofinternational radio regulations."

A similar reaction came September 6 from Amateur Radio Society of India (ARSI) Monitoring System Coordinator B.L. Manohar Arasu, VU2UR, who pointed the finger at both the Sound of Hope and the Firedragon music jammer. "We, the Indian Amateur Radio operators, condemn both of you for using Amateur Radio frequencies," he said. "Please leave the frequencies clear at the earliest." Arasu suggested the jamming not only was bother some to every day hamming but could cause problems for emergency communication by radio amateurs.

New Zealand Association of Radio Transmitters (NZART) Monitoring Service Coordinator Len Martinson, ZL1BYA, e-mailed the Sound of Hope September 6 to say its "illegal broadcast transmissions" were causing unlawful and harmfuli nterference to the legal occupants of the Amateur Radio bands in question."Your transmissions are also attracting the attention of jamming stations,which is increasing the interference to unacceptable levels," he said."Please cease transmissions in the exclusive amateur bands immediately."

Writing SOH on behalf of the IARU, Secretary David Sumner, K1ZZ, asked the clandestine broadcaster to be more careful in its selection of transmitting frequencies. "Your operations in the 14 and 18 MHz bands have caused serious interference to the amateur radio service, which is allocated these bands (14.000-14.350 and 18.068-18.168 MHz) for two-way amateur radiocommunication," Sumner wrote. "Please do not operate in these or any other amateur radio bands.

"Bihlmayer said September 6 that the Firedragon was back on 14.050 MHz -- a part of the 20-meter band allocated to the Amateur Radio Service on an exclusive basis worldwide -- after spending two days on 14.400 MHz. Over the past several months, the jammer also has been heard on 10.135 MHz, 14.260MHz, 18.080 MHz and 18.160 MHz.The music jammer takes apparent monitoring breaks on the hour. When the jammer's carrier is off, Bihlmayer, who lives in Southern Germany, says he's heard a weak carrier on 14.050 MHz broadcasting a Chinese program that included speech.

ARRL Monitoring System/Intruder Watch Liaison Chuck Skolaut, K0BOG, says he's been able to hear the jammer from W1AW. In July, when the same jammer also was appearing on 18.160 MHz, Bihlmayer alerted telecom authorities in Germany and Hong Kong, as well as IARU Region 3 and the PRC embassy in Berlin to the situation. The 17-meter band also is a worldwide exclusive Amateur Radio allocation. Skolaut says he's received reports about the music jammer from all over the US, including Alaska, Hawaii and Puerto Rico.

Federal, state and local officials today heralded the implementation of a fully interoperable communications service at Dallas Love Field that for the first time allows police, fire, Federal agencies, private industry and airport personnel to communicate with each other over their existing networks and equipment. The Dallas Love Field Wireless Integration Project is the result of a unique public-private partnership that gives the Dallas region the first interoperable network in the nation that utilizes secure voice, video and data communications for emergency response and critical infrastructure management.

"While the essential roles and responsibilities of our nation's first responders and governments on all levels has been highlighted significantly in the wake of 9/11, Hurricane Katrina and countless other tragedies throughout the country, the vast majority of the police, fire and EMS personnel who serve as our frontline of defense still do not have one of the most basic resources they need to do their jobs: namely the ability to communicate easily and securely with one another," said Mark Tucker, chief executive officer and co-founder of CoCo Communications. "Today, however, I am pleased to be here in Texas, joined by an extraordinary group of people representing a cross-section of local, state and Federal agencies who have worked in partnership to successfully address this challenge and establish the nation's first interoperable and secure emergency communications service."

The State of Texas, the City of Dallas, the Texas Congressional Delegation, the North Central Texas Council of Governments and the U.S. Department of Homeland Security (DHS) recognized the ongoing interoperability challenges and joined forces with CoCo Communications to implement a service that met the needs of first responders and the budget realities of local, state and Federal agencies and departments. Using funds from DHS, the Project was initiated with the goal of implementing the communications framework for a national interoperability service model that could be cost effectively duplicated throughout the State of Texas and nationally.

The system that was ultimately approved and deployed is based on CoCo Communications' software, known as the CoCo Protocol, which 'rides' on top of existing network infrastructures, dramatically extending the return on investment in legacy devices and networks, while eliminating communication breakdowns created by systems that simply do not 'talk' with each other because of differing frequencies or operating systems. This makes two-way radios compatible with other radios and commonly deployed devices including cellular phones, laptops and PDAs by creating a common interface that can be shared by all available resources. The result is a comprehensive interoperable network that is easy and affordable to implement and expand as needed. Additionally, the service allows for efficient use of fixed network resources such as spectrum. Instead of loading networks with devices that deplete the networks' operating capacity, CoCo's software creates a "mesh" architecture in which every device that accesses the network adds to the network, with each device acting as its own router.

This service also allows for unprecedented management and control capabilities, integrating command center and on-the-ground activities among Dallas Love Field, the City of Dallas and Southwest Airlines personnel, as well as State of Texas and Federal officials and workers. Users securely access the service from end-user device interfaces, such as laptops or PDAs, where people can view video feeds and a customized information "ticker." At the same time, they are able to converse with their colleagues to share critical information during emergency situations or for normal day-to-day activities.

Current users and participants of the program include: 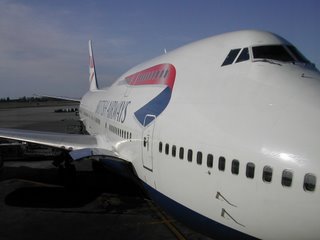 Elp, G0AQI posted the following to a ute newsgroup:

"It is with some sadness, and not a bit of dissapointment that I report the demise of Speedbird London SSB LDOC station.The big switch was pulled for good on 26/8/2006 at 23:00Z at the end of the late shift. British Airways, in their wisdom, have given the contract for provision of HF LDOC* services to Stockholm Radio and US based company, ARINC who, strangely, seem to have the worldwide monopoly on the ACARS system. presumably market forces had the upper hand and Stockholm put in a cheaper bid that the previous incumbents, Air Radio ltd who had operated the service for the last three years since BA's communications branch, (Speedwing Communications) was dissolved. Speedbird London has been on the air, barring breakdowns, 24/7/365 since first established by BA in 1968. Stockholm Radio have their own website, their HF and Marine freq's are listed there, or at least they used to be. First Concorde, now Speedbird London. It's the end of an era."