This fall, we've had semi-regular transmissions Tuesday and Wednesday mornings as well as Thursday afternoon. Especially interested in reports today and tomorrow as our CE Øystein made improvements in the modulation on MW last evening. We made a brief test on 1314 then. Especially the morse ident should travel well now. And, we are looking for the specs of our Western Electric! Our QSL card has arrived, and are being sent out, but still reports are welcome! Address: Box 100, N5331 RONG, NORWAY or report@bergenkringkaster.no.
Posted by Larry at 10/31/2013 06:48:00 AM

Editor Note: Since Monitoring Times will cease publication in December, Teak Publishing will take over publication of Larry Van Horn's Annual Air Show frequency guide and it will be available soon as a Kindle publication at Amazon.com. Watch this blog for a release announcement. 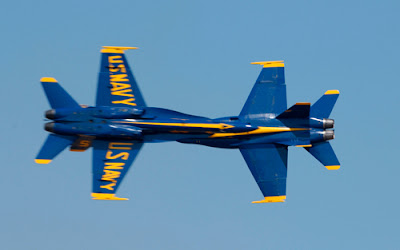 Click here for a really neat video on the Blues return.

The U.S. Navy Flight Demonstration Squadron, the Blue Angels, will return to its full schedule for the 2014 air show season.

"Community outreach is key to connecting Americans to the military," said Blue Angels Commanding Officer and Flight Leader, Cmdr. Thomas Frosch. "Our performances provide a unique opportunity to inspire millions to connect with and support our service members, and we are looking forward... to an exciting 2014 season."

The Blue Angels are scheduled to perform 65 shows at 34 locations throughout the U.S. in 2014.

The Navy believes there is value in demonstrating the professionalism and capabilities of our Navy and Marine Corps Naval Aviation team, thus inspiring future generations of Sailors and Marines.

Here is the official 2014 Blue Angel schedule from their public affairs office.

Well this has truly been a remarkable 48 hours. The North American Enroute Aviation Guide has roared to an Amazon #1 Best Seller in several categories and in both Kindle/Books and has stayed there.

To all of you who have purchased it so far a big -- Thank You. And we want to extend to the four buyers who have passed along their 5 star reviews - our deepest thanks.

We have many more radio hobby e-books in the works, including Gayle's exclusive International Shortwave Broadcast Guide so stay tuned.

And you can see my new North American Enroute Aviation Guide for $2.99 at http://www.amazon.com/dp/B00G0683GG

Again thank you all for buying our Teak Publishing e-books products.

We just received this press release from the managing editor of The Spectrum Monitor magazine.
The Spectrum Monitor is a monthly electronic magazine that delivers full-spectrum coverage of amateur radio, longwave and shortwave listening, public service scanning, AM/FM/TV broadcasting, satellites, WiFi radio, vintage radio and more. The Spectrum Monitor is a follow-on publication to Monitoring Times and is not associated with Grove Enterprises or Bob Grove. TSM’s columnists and feature writers come directly from the pages of Monitoring Times, bringing readers an in-depth look at every segment of the radio frequency spectrum.
Each month TSM readers will get reviews of the latest receivers, antennas, software and accessories needed to explore the spectrum, with tips for beginners and advanced hobbyists alike.
The Spectrum Monitor is available in PDF format that can be read worldwide on any desktop, laptop, iPad®, Kindle® Fire, or other device capable of opening a PDF file. The January 2014 issue will be available for download from http://www.thespectrummonitor.com/ on December 15, 2013. Charter subscribers can sign up now and save!

Special charter subscriber rate: $20 for twelve issues. After December 15, 2013, annual rate: $24 for twelve issues. Individual monthly issues will be available for $3 each. You can sign up on the magazine's secure website to become a charter subscriber. Mastercard™, VISA™ and Discover™ cards are accepted. Outside the U.S.? Contact editor@thespectrummonitor.com for subscription instructions.
The website is now gone live and can be viewed at the URL above.
Posted by Larry at 10/14/2013 12:52:00 PM