Yep, I spend the weekend participating in the annual ARRL Field Day event. Ran the ops from the shack and worked PSK31 exclusively all weekend long. I was very satisfied with my results.

Many thanks to all who answered my calls. Will be uploading the logs to LOTW shortly. If you need a card feel free to send yours along and I will get one right back at you. Full details at QRZ.com.
Posted by Larry at 6/30/2008 05:19:00 AM

You can get the official DoC/NOAA National Hurricane Operations Plan for 2008 at
http://www.ofcm.gov/nhop/08/pdf/Entire_NHOP_2008.pdf 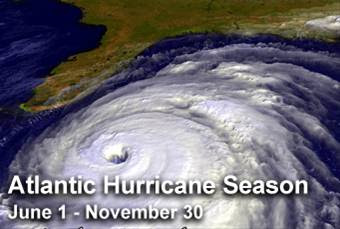 Hurricane season officially began June 1, and people across the country are gearing up for another season of strong winds, torrential rains, hail and flying debris.
Because they move frequently, many military families who have never lived in a hurricane-prone area before are experiencing their first hurricane season. But even for those who have been through hurricanes before, knowing how to prepare is important.

The National Oceanic and Atmospheric Administration has predicted that the 2008 hurricane season will produce six to nine hurricanes. Two to five of those hurricanes are predicted to be major hurricanes categorized as 3, 4 or 5 on the Saffir-Simpson Scale.

Although the last two seasons saw fewer major hurricanes than in prior years, experts say it is still a good idea for people in hurricane-prone areas to be prepared for anything and have a plan of action.

"The key element though, the cornerstone, has got to be that individual preparation," Homeland Security Secretary Michael Chertoff said at a 2008 Hurricane Preparedness Day event May 30. "If people are lulled into a sense of complacency because 2006 and 2007 didn't produce a major hurricane in the U.S., and they don't do the preparation that we've recommended, then there is going to be a problem."

An article published online in NOAA Magazine cited a common myth: that because a hurricane would destroy their property, people needn't bother preparing for the storm by protecting their home.

Although their home may, indeed, experience some damage, the article states, taking some basic precautions can significantly reduce damage from a storm. "Damage assessment photos of areas devastated by hurricanes will often show one house standing, while a neighbor's lies in ruins," the article said.

The article goes on to say the difference between the two homes is that the owner with property left in good condition most likely took some precautions and prepared for the storm.

People also are encouraged to listen to the news, weather updates, and local authorities.

"Follow the instructions of local authorities," Bill Chandler, executive director for USAA's national catastrophe operations said. "And have a plan."

Chandler expressed the importance of having alternate evacuation plans as well as checklists of items you might need to get through the storm and its aftermath.

He suggested stocking up on items such as two to three gallons of water per person per day, nonperishable foods, prescription medications in their original packaging, clothing, blankets, extra batteries, flashlights and a first aid kit.

It may also be necessary to have a hand-operated can opener and a battery-operated radio to use if the electricity goes out.

Chandler also recommended having a safe place to keep important documents. He suggested keeping them in a lock box, storing them online, or saving them on a computer and then transferring them to a thumb drive.

Military commissaries have taken action in helping servicemembers and their families prepare for hurricane season. Their "What's in Your Closet?" campaign encourages people shopping in the commissaries to stock up on a list of items they may need in case of a natural disaster.

Preparing the outside of your home for potential disasters is another way to help prevent damage. This can be as simple as cleaning out gutters and trimming trees to keep them away from roof lines.

Another important way to protect your property as well as your neighbor's property is to bring your outdoor items in, Chandler said. Bring in lawn furniture, trash cans, toys, and flower pots -- anything that can turn into debris or a projectile in strong winds.

Chandler also said to move things within your home around. Moving or hiding valuables and keeping things out of the sight of others is important to prevent looting after a storm, he explained.

John Hancock, USAA's military communications manager, stressed the importance of seeking and heeding guidance from authorities. "Listen to authorities and the leadership on your installation, as well," he said. "They will also have information and updates for you on whether to evacuate or take shelter."

More than anything else, Chandler said, hurricane preparation is common sense.

"These events are very stressful," he said. "And it's very easy to forget about common sense."

Stocking up on food and water, creating a shelter in your home and preparing both the interior and exterior of your home can help protect both your family and your property from the devastating effects of a hurricane.