Joe Taylor K1JT, has released a new version of his WSJT-x (v0.95, r3251) software package yesterday (May 2) and JT9 fans will love it. This new package has been modernized and has the look and feel of Joe Large W6CQZ  JT65-HF package.

This new version of Joe's popular WSJT software series offers a new mode called JT9, designed for use on the LF, MF, and HF bands. JT9 shares many characteristics with the modes JT65 and JT4 made popular in WSJT. All three modes are designed for making minimal QSOs under extreme weak-signal conditions. They use nearly identical message structure and source encoding. JT65 was designed for EME on the VHF/UHF bands and has also proved very effective for worldwide QRP communication at HF; JT4 is used mainly on the microwave bands. In contrast, JT9 is optimized for HF and lower frequencies. JT9 is about 2 dB more sensitive than JT65A while using less than 10% of the bandwidth. World-wide QSOs are possible with power levels around 1 W and compromise antennas, and several dozen JT9 signals fit easily into a 1 kHz slice of spectrum.

I can vouch for the weak signal capability of the new JT9-1 mode. Again yesterday, I worked K0KUK up on 6 meters during a nice E-skip opening into Wisconsin and Minnesota. Arthur was running 50 watts and I was running 10 watts into a PAR 6 meter Moxon antenna. Thanks Arthur and a LOTW entry is on the way for you.

All WSJT modes use timed sequences of alternating transmission and reception. JT9 offers five choices for the sequence durations: submodes JT9-1, JT9-2, JT9-5, JT9-10, and JT9-30 use 1, 2, 5, 10, and 30 minutes, respectively. A minimal QSO with JT9-1 usually takes 4 to 6 minutes: 2 or 3 transmissions by each station, one transmitting in odd minutes and the other even. The remaining JT9 submodes take proportionally longer, so JT9-1 is the preferred submode under most circumstances.

The sub-modes with longer transmissions trade reduced throughput for smaller bandwidth and increased sensitivity. The slowest sub-mode, JT9-30, has total bandwidth 0.4 Hz and operates at signal-to-noise ratios as low as –40 dB measured in the standard 2.5 kHz reference bandwidth. It requires very stable oscillators in both transmitter and receiver. JT9-1 is always the recommended submode unless you really need the additional sensitivity of a slower mode.

According to Julian G4ILO on his blog, "Due to the health issues of the developer Joe Large, it has been some time since there was a new version of his popular JT65-HF application." The good news is that Joe Taylor's plans for future program development call for WSJT-X and WSJT to merge together: WSJT-X will gradually acquire the modes JT65, JT4, FSK441, and ISCAT that are now supported in WSJT.

Joe says that the entire WSJT-related effort is an open-source project. If you have programming skills or would like to contribute to the project in other ways, please make your interests known to K1JT and the rest of the development team. The project’s source-code repository can be found at http://developer.berlios.de/projects/wsjt/.

You can download your copy of the WSJT-x (v0.95, r3251) software package at http://physics.princeton.edu/pulsar/K1JT/wsjt.html.

You can get more information on digital modes in the May issue of Monitoring Times. I have written two new features of amateur radio digital modes for this issue.

Digital World Extends Amateur Radio Horizons
Many hams fall into mode rut. They operate either SSB or CW, rarely both and typically never
venturing into the growing world of digital modes. In this article I show you that there’s more
to digital operating than RTTY or PSK31. New low-power, weak-signal modes make it possible
to work the world under the worst possible band conditions. And, thanks to a withering Solar Cycle, there’s more reason than ever to look at the digital way of hamming.

MT’s Digital Mode Operating Guide
A profusion of new digital operating modes are squeezing into areas of more traditional operating modes and you’ll need a detailed program to find out where the players are! Luckily, In this feature article I put together the definitive list of operating frequencies for all digital modes on all bands from
160 meters through satellite frequencies. Once you know where the operators are, you’ll know which modes to use to decode the action. 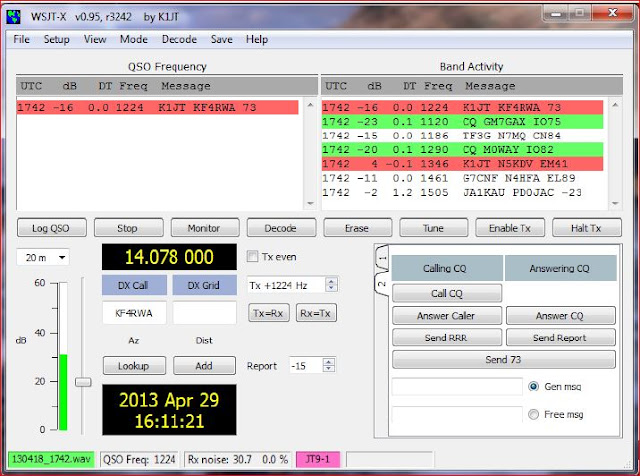