Airmen from the 45th Space Wing supported the Feb. 17, 2007, launch of a Delta II booster carrying five NASA probes on a mission called "THEMIS," which will study auroral substorms, an avalanche of solar wind powered magnetic energy that intensifies the northern and southern lights.

"We made history. This was the largest number of NASA scientific satellites launched on a single booster. It was a tremendous joint effort between the Air Force, NASA and industry," said Col. Tom Bouthiller, 45th Space Wing vice commander. "Congratulations to NASA and all of our mission partners on a great start to an endeavour that will help us unlock the mysteries of the auroras."

The 45th SW provided launch base and eastern range support that helped ensure public safety and mission success via instrumentation such as radar, telemetry, communications and meteorological systems.

THEMIS is an acronym for Time History of Events and Macroscale Interactions during Substorms. The THEMIS mission goal is to help scientists further understand how and why these space storms create havoc with satellites, power grids and communications systems.

You can learn more about the THEMIS mission at http://www.nasa.gov/mission_pages/themis/main/index.html 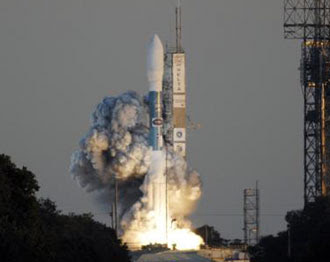