CQ WW DX CONTEST PARTICIPANT SURVEY ---> On 2-29  September  the  CQ  WW  DX Contest Committee conducted a survey to gather feedback  from  participants, and 5,117 responses were received from contest operators around  the  world. The first results are now available at http://cqww.com/blog/.

HAMS WITH HEARTS ---> The International DX  Association  has  announced  the
formation  of  a  new  fund  within  INDEXA   that    specifically  supports
humanitarian projects carried  out  by  DXpeditions.  The  generous  initial
contribution  by  Zorro  Miazawa  (JH1AJT)  will  enable  INDEXA   to  begin
humanitarian support grants beginning mid-January of 2016. The tag line  for
this fund is  "Hams  with  Hearts".  To  qualify  for  humanitarian  grants,
DXpeditions must  present  a  clear  plan  for  a  humanitarian  project  to
coincide with their DXpedition. The project must  provide  direct,  physical
benefit to the local population. See www.indexa.org/hamswithaheart.html  for
further information. [TNX W3OA]

NPOTA --->  Celebrating  the  100th  anniversary  of  the  creation  of  the
National Park Service, the ARRL National Parks  on  the  Air  (NPOTA)  event
will run from 00.00 UTC on 1 January through 23.59 UTC on 31 December  2016,
with activity promoted and  encouraged  from  each  of  the  more  than  430
official NPS administrative units and affiliated areas across  the  US.  The
program will have two participation  tracks  (Chasers  and  Activators)  and
will  be  administered  entirely  through  LoTW.  Complete  details  on  the
National Parks on the Air event are available on http://www.arrl.org/NPOTA.

TX3X LOTW & QSL CARD STATUS ---> The following update  was provided  by Gene Spinelli, K5GS on 12 December:
- Not in Log and busted call inquires have been researched and answered.  If
you did not receive a reply to an inquiry  please send  only one e-mail to
k5gs[@]pdxg.net with the details of the missing QSOs.
- Several "Not in Log" call signs were reported to be  found in the logs  of
other DXpeditions or a Cuban Special Event station that were active at the
same time as TX3X.
- The complete log will be uploaded to LoTW in May 2016.
- Individuals  that  donated  to the  project  at any  time - your LoTW  was
uploaded.
- OQRS  PayPal  requests are  processed daily, please  allow 24-48 hours for
LoTW upload.
- If you made  a donation  or processed an OQRS using PayPal and are missing
an LoTW send an e-mail to k5gs[@]pdxg.net. All others, please wait for the
complete log to be uploaded.
- Direct  cards should  be mailed to Chesterfield Expedition, P.O. Box 1100,
Kenilworth, CV8 2YT, United Kingdom.  Those who  send direct  cards - your
LoTW will be  uploaded  when  we enter  the contact  information into  the
system. QSL requests received with insufficient funds will be sent via the
bureau.
- We are finalizing the QSL card design and will  send to the printer  by 18
December. Cards will be mailed from the UK in January.

YF1AR/8 ---> The direct links to Club Log's logsearch and OQRS  for  YF1AR's
recent "Moluccas IOTA Tour" are now up and running  on  www.qrz.com/db/YF1AR
and www.yf1ar.com.

+ SILENT KEY +  Isidro  Gabino  "Gabi"  San  Martin  Hernandez  died  on  11
December in a 9-hour shootout in Afghanistan. He was 48 and  the  father  of
four. Gabi was part of a police contingent guarding the Spanish  Embassy  in
Kabul when a car bomb exploded at the Embassy Guest House gate. The  bombers
then entered the compound, and a gun battle erupted. At least seven  members
of the diplomatic staff were killed. [TNX ARRL]

Its contents may be used, reproduced and distributed
in part or full provided that
"425 DX News" or "425DXN" receive proper credit

Contributors are invited to send their DX information to
Mauro Pregliasco, I1JQJ (425dxn@alice.it)
The deadline is 12 UTC on Fridays

It is now 10 years since our first Christmas Eve transmissions started.
There will be, as earlier, a transmission with the Alexanderson alternator on VLF 17.2 kHz CW from Grimeton Radio/SAQ in the very early morning on Christmas Eve, Thursday, December 24th 2015.
A message will be transmitted at 08:00 UTC. The transmitter will be tuned up from around 07:30 UTC.
There will be no activity on amateur radio frequencies with the call SK6SAQ this time because the radio room is redecorated and cannot be used.

Also read our web site: www.alexander.n.se
The radiostation will be open to visitors.

This week's bulletin was made possible with information provided by QRZ DX, the OPDX Bulletin, 425 DX News, The Daily DX, DXNL, Contest Corral from QST and the ARRL Contest Calendar and WA7BNM web sites. Thanks to all.

REUNION ISLAND, FR.  Mario, FR4QT will be active on December 19 and 20 and December 26 with the call TO90R celebrating the 90th anniversary of the REF.  QSL via FR4QT, direct.

NAMIBIA, V5.  Dietmar, DL3DXX will be active until December 28 as 5/DL3DXX, mostly on CW and the low bands.  QSL via home call, direct or via bureau.

MAURITIUS, 3B8.  Eric, OE4AAC will be QRV as 3B8HD during February of next year.  He'll be QRV mostly on CW on 40 and 30 meters.  QSL to home call either via the bureau or direct.

VANUATU, YJ.  Robert, DL7VOA will be active as YJ4AO from December 27 and January 13, 2016.  Activity will be holiday style mainly on CW during his evening and night hours, maybe some SSB but no digital.  QSL via home call sign, direct or by the bureau.

THIS WEEKEND ON THE RADIO.  The Feld Hell Sprint, OK DX RTTY Contest, RAC Winter Contest, Croatian CW Contest and the ARRL Rookie Roundup, CW are all on tap for this weekend.  The Russian 160 Meter Contest and the AGB-Party Contest are on December 18.  The Run for the Bacon QRP Contest is on December 21.  Please see December QST, page 69 and the ARRL and WA7BNM contest web sites for details.
NNNN
/EX
Posted by Larry at 12/18/2015 05:48:00 AM

The ARISS Russia team is making plans to support a couple of Slow Scan TV (SSTV) events in the next few months on 145.800 MHz FM.
The first session is being targeted for Dec 26-27 (subject to change) to celebrate 15 years of ARISS school contacts with the ISS crew.
\
The down link mode will be PD120 which should allow for the opportunity to receive more images in a single pass. Watch for updates and additional information as it becomes available.
The ISS puts out a strong signal on 145.800 MHz FM and a 2m handheld with a 1/4 wave antenna will be enough to receive it. The FM transmission uses 5 kHz deviation which is standard in much of the world. In IARU Region 1 (British Isles, Europe, Africa) FM equipment is usually set by default to the narrower 2.5 kHz deviation.
Many FM rigs can be switched been wide and narrow deviation FM filters. For best results you should select the filter for wider deviation FM. Handhelds all seem to have a single wide filter fitted as standard.
ISS Slow Scan TV hints and links http://amsat-uk.org/beginners/iss-sstv/
ARISS SSTV Blog http://ariss-sstv.blogspot.co.uk/
Source: AMSAT-UK
Posted by Larry at 12/18/2015 05:44:00 AM 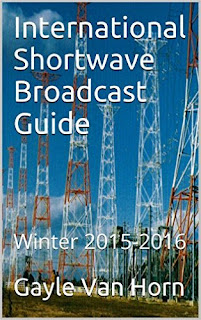 What is shortwave radio and why should you listen to it?


Shortwave listening, or SWLing, is the hobby of listening to shortwave radio broadcasts transmitting on frequencies between 1700 kHz and 30 MHz. These transmissions can propagate thousands of miles and can reach audiences worldwide. For instance, if you live in the United States you can easily hear shortwave broadcast stations from countries like Australia, Canada, China, Cuba, Egypt, France, Germany, India, Iran, Japan, New Zealand, North/South Korea, Saudi Arabia, Taiwan, Turkey, United Kingdom, United States, Vietnam, and many other counties if you have a good shortwave radio receiver, and you know when and where to listen!


Quite simply shortwave radio provides the listener with a window to the world that no other communications medium can provide. The listener will be entertained with unique perspectives to events from around the world that you cannot get from most national media outlets.


Throughout the world, shortwave radio remains the most readily available and affordable means of global communication and information. You'll learn about the lives and concerns of people from all walks of life in over 300 different languages and dialects. Shortwave radio also provides nearly instantaneous coverage of news and events from around the world.


There are even transmissions from the dark side of shortwave radio from broadcasters known as clandestine or clanny stations. Clandestine broadcasters are deceptive and they usually exist to bring about political changes or actions to a particular target country. Programming is essentially propaganda, and may largely be half-truths or sometimes outright lies.


If you want to get into the action then the International Shortwave Broadcast Guide is a must purchase to let you know when and where to listen for broadcast radio stations in the shortwave broadcast spectrum.


It is a 24-hour station/frequency guide to “all” the known stations currently broadcasting on shortwave radio at time of publication. This unique shortwave resource is the “only” publication in the world that offers by-hour schedules that includes all language services, frequencies and world target areas for each broadcast station.


New In this edition, there is a feature on listening to Asia’s broadcast giant – China, updated information on the state of tropical band broadcasting, and a special feature on Who’s Who in the shortwave radio spectrum outside the regular broadcast bands. Frequency and station coverage has also increased in this edition to include Longwave frequency broadcasters, and international standard time and frequency stations worldwide.


The International Shortwave Broadcast Guide (Winter 2015-2016 edition) is now available for purchase worldwide from Amazon.com at http://www.amazon.com/gp/product/B0196UYDTI. The price for this latest edition is US$5.99. Since this book is being released internationally, Amazon customers in the United Kingdom, Germany, France Spain, Italy, Japan, India, Canada, Brazil, Mexico and Australia can order this electronic book (e-Book) from Amazon websites directly servicing these countries. All other countries can use the regular Amazon.com website.

This new e-publication edition is an expanded version of the English shortwave broadcast guide that was formerly printed in the pages of Monitoring Times magazine for over 20 years. This one of a kind electronic e-book is published twice a year to correspond with station seasonal time and frequency changes.


If you enjoy listening or monitoring HF shortwave stations, and you miss the monthly English frequency listings formerly published in the late Monitoring Times magazine, and multilingual station listing in the old MTXpress electronic magazine, this valuable tool will now be your new guide to listening to the world.


Frequency updates between editions will be posted on her Shortwave Central blog at: http://mt-shortwave.blogspot.com/.


And, the good news is that you do not need to own a Kindle reader to read Amazon e-book publications. You can read any Kindle book with Amazon’s free reading apps.


There are free Kindle reading apps for the Kindle Cloud Reader, Smartphones (iPhone, iTouch, Android, Windows Phone and Blackberry); computer platforms (Windows XP, Vista, 7 and 8 and Mac); Tablets (iPad, Android and Windows 8), and, of course, all of the Kindle family of readers including the Kindle Fire series. A Kindle e-book allows you to buy your book once and read it anywhere. You can find additional details on these apps by checking out this link to the Amazon website at www.amazon.com/gp/feature.html?ie=UTF8&docId=1000493771.


You can view the complete Teak Publishing book catalog online at http://mt-shortwave.blogspot.com/. Click on the Teak Publishing radio hobby e-book link at the top of the blog page. You can learn more about the author by going to her author page on Amazon at http://www.amazon.com/Gayle-Van-Horn/e/B0084MVQCM/.


The International Shortwave Broadcast Guide will have wide appeal to shortwave radio hobbyists, amateur radio operators, educators, foreign language students, news agencies, news buffs, and many more interested in listening to a global view of news and events as they happen.


If you are an amateur radio operator or shortwave radio enthusiasts, and want to hear what is happening outside the ham bands on that transceiver or portable shortwave radio in your radio shack, then this new e-book from Teak Publishing is a must in your radio reference library.
Here are a few of the public comments from radio hobbyists who purchased the first four editions of this Amazon e-book.