NASA Sees the 'Dark Side' of the Sun 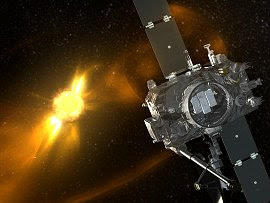 An artist's concept of one of the STEREO spacecraft.

Note for my readers who have X-band capability, you can participate in monitoring these spacecraft. More in the storey below-N5FPW

January 23, 2009: Today, NASA researchers announced an event that will transform our view of the Sun and, in the process, super-charge the field of solar physics for many years to come.

And on the same day," he adds, "NASA's two STEREO spacecraft will be 180 degrees apart and will image the entire Sun for the first time in history."

STEREO's deployment on opposite sides of the Sun solves a problem that has vexed astronomers for centuries: At any given moment they can see only half of the stellar surface. The Sun spins on its axis once every 25 days, so over the course of a month the whole Sun does turn to face Earth, but a month is not nearly fast enough to keep track of events. Sunspots can materialize, explode, and regroup in a matter of days; coronal holes open and close; magnetic filaments stretch tight and—snap!—they explode, hurling clouds of hot gas into the solar system. Fully half of this action is hidden from view, a fact which places space weather forecasters in an awkward position. How can you anticipate storms when you can't see them coming? Likewise researchers cannot track the long-term evolution of sunspots or the dynamics of magnetic filaments because they keep ducking over the horizon at inconvenient times. STEREO's global view will put an end to these difficulties.

The global view is still two years away. Already, however, the two spacecraft are beaming back over-the-horizon images that have researchers and forecasters glued to their monitors.

"This is a perspective we've never had before," says STEREO mission scientist Lika Guhathakurta of NASA headquarters. "We're now monitoring more than 270 degrees of solar longitude—that's 3/4ths of the star."

"After all these years," she laughs, "we're finally getting to see the dark side of the Sun."

(Editor's note: The Sun has no dark side. That was a solar physics joke.)

STEREO's journey to the "dark side" began on Oct. 25, 2006, when the twin probes left Earth together onboard a Delta II rocket. High above the atmosphere, they separated and headed for the Moon. What happened next was a first in space navigation. The Moon acted as a gravitational slingshot, flinging the two probes in opposite directions—STEREO-A ahead of Earth and STEREO-B behind. They've been spreading apart ever since.

Because of the way the Sun spins (counterclockwise in the diagram above), STEREO-B gets a sneak preview of sunspots and coronal holes before they turn to face Earth—a boon for forecasters.

At the moment, STEREO-B enjoys a 3-day look-ahead advantage over Earth-based observatories. This has allowed researchers to predict geomagnetic storms as much as 72 hours earlier than ever before. On several occasions in late 2008, STEREO-B spotted a coronal hole spewing solar wind before any other spacecraft did.

St. Cyr notes that experienced ham radio operators can participate in this historic mission by helping NASA capture STEREO's images. The busy Deep Space Network downloads data from STEREO only three hours a day. That's plenty of time to capture all of the previous day's data, but NASA would like to monitor the transmissions around the clock.

"So we're putting together a 'mini-Deep Space Network' to stay in constant contact with STEREO," says Bill Thompson, director of the STEREO Science Center at Goddard.

The two spacecraft beam their data back to Earth via an X-band radio beacon. Anyone with a 10-meter dish antenna and a suitable receiver can pick up the signals. The data rate is low, 500 bits per second, and it takes 3 to 5 minutes to download a complete image.

So far, the mini-Network includes stations in the United Kingdom, France and Japan—and Thompson is looking for more: "NASA encourages people with X-band antennas to contact the STEREO team. We would gladly work with them and figure out how they can join our network."

The two STEREO spacecraft rank among most sophisticated solar observatories launched by NASA to date. They are equipped with sensors that measure the speed, direction and composition of the solar wind; receivers that pick up radio emissions from explosions and shock waves in the sun's atmosphere; telescopes that image the solar surface and all the tempests that rage there; and coronagraphs to monitor events in the sun's outer atmosphere.

"So, really," says Guhathakurta, "we're not only seeing the sun's dark side, we're feeling, tasting and listening to it as well."

Super Bowl Sunday may never be the same….