Story courtesy of the November 9 ARRL Letter (Vol 26 No 45). My comments will be in the brackets and are my own. They have nothing to do with the ARRL.

As the International Telecommunication Union's 2007 World Radiocommunication Conference (WRC-07) in Geneva headed toward its fourth and final week, the proponents of additional allocations to HF Broadcasting conceded defeat and accepted that there will be no additional allocations made to HFBC at this conference. The slim possibility of a 5 MHz allocation to the Amateur Service also evaporated late Friday evening, according to IARU Secretary David Sumner, K1ZZ.

[Absolutely outstanding. The HFBC community got exactly what they deserve - nothing.]

HFBC has been a contentious issue at ITU conferences for decades. [Duh!] At WRC-07, additional HFBC allocations between 4 and 10 MHz were supported by 25 European administrations and a few outside Europe but were strongly opposed by every other regional organization. Opposition to additional HFBC allocations was based mainly on a desire to protect military and other government fixed and mobile communications, although some of the administrations that were the most outspoken opponents of HFBC expansion authorize HFBC stations under their jurisdiction to operate out-of-band in the fixed and mobile allocations. Some HFBC proponents predict that the unsatisfactory outcome of the conference on this issue will lead to even more out-of-band broadcasting.

[I am sick and tired of hearing the HFBC community say that their HF audiences are shrinking, they aren't making any money, and they are going to have to go off HF. Then in the same breath they turn around and ask for more frequencies in Geneva. These are the same folks who make a living tuning up their high power transmitters anywhere in the spectrum they want and interfering with other legitimate services. There is absolutely no good reason for any broadcaster to operate outside of their assigned bands, and the FCC and other regulatory agencies worldwide should rein in this abuse ASAP. How can any radio service beg for more freqs to be assigned to them and they can't even regulate themselves and exhibit some form of self control in their operations.

And to make matters worse, the out-of-band broadcasting by SW broadcasters in this country is completely out of control. I blame the corrupt, political commissioners at the FCC for letting this happen (are you listening up in DC). It is time to stop spectrum management by highest bidder and get back to basic, sound and scientific techniques. 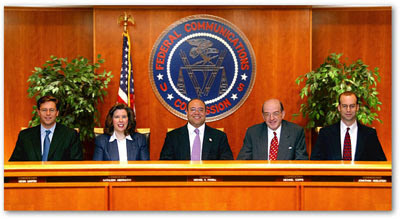 The Federal Communications Commission (FCC) is suppose to be an independent regulatory commission, directly responsible to Congress. The FCC was established by the Communications Act of 1934 and is charged with regulating interstate and international communications by radio, television, wire, satellite and cable. It is directed by five commissioners appointed by the President and confirmed by the Senate for 5 year terms.

Congress and the FCC have made a mess of the radio spectrum. I see absolutely NO leadership in these matters in DC - only greed and money. Seems the greed, money, power and corruption we see in Congress has now migrated into various federal agencies as well. Money pays for power. Power corrupts, and absolute power corrupts absolutely.

This is a serious situation when at a World Regulatory Conference, the HFBC community predicts that because they didn't get their way on their issues it will lead to even more out-of-band broadcasting.

My message to any of you broadcasters who are out-of-band or supported the initiatives at WRC-07 for more frequency spectrum -- get a grip and clean up your act. Only then will the rest of the spectrum users you constantly screw over might listen and support your intiaitives. You have an extremely poor track record in these matters and an even poorer image in the world of international communications. The rest of us who have to share the HF spectrum with you are done with your tricks, tirades and shenanigans. ]

A footnote specifically authorizing administrations to allow amateur stations to use spot frequencies in the 5 MHz range was considered Friday evening (Geneva time) at the Sub Working Group level as one of the last items of business concerning the 4-10 MHz range. The footnote failed to attract sufficient support and was withdrawn from consideration by its sponsor, the European regional organization (CEPT). This has no effect on the administrations that have authorized amateur operations under the no-interference provisions of Radio Regulation 4.4.

On a more positive note for radio amateurs, a secondary allocation of 135.7-137.8 kHz to the Amateur Service was approved on first reading in Plenary on Friday afternoon, November 9. This marks the first time since allocations to radio services began that the Amateur Service has had an allocation below the medium wave broadcasting band. The effective date is not yet set, but is likely to be the date of entry into force of the Final Acts of the Conference. Of course, amateurs must wait until their own administrations authorize the new allocation before they can use it. Some administrations, while not wishing to block the international allocation, have indicated a reluctance to implement it in their countries because of various interference concerns.

[It is about time the international community got off their butts and made this a reality. Time to put this wasted spectrum to use by some folks who will put it to good use. I am sure that all of my fellow hams sicnerely appreciate the new radio spectrum.]

Work continues on the agenda for future WRCs, tentatively scheduled for 2011 and 2015. There are many more proposals for agenda items for the next conference than can be accommodated, so only those with broad support are likely to be included. Committee work on the future agendas is scheduled for completion early next week.
Posted by Larry at 11/10/2007 08:13:00 AM