Another quiet week, but strangely, like the previous week there was just a single sunspot appearing for one day, and it was also on a Tuesday. Just like the previous week, the daily sunspot number was 11, and then it went back to 0 when the spot disappeared. No spots expected in the near future.

Many interesting emails this week, and one came from Bob Marston, K6TR of Fremont, California. He mentioned the theory about magnetic polarity of sunspots, and how we expect them to shift as we move into a new cycle. But some time back a reverse polarity spot appeared, and was hailed by some as the first spot of Cycle 24, but it turned out this wasn't the case. Bob says about 3 percent of the spots in any cycle are rogue spots with reverse orientation. What will be significant is when we start to see spots appearing away from the equator.

Bob continued, "The second topic I want to address is the item Carl Luetzelschwab, K9LA, brought up referencing his communication with Mike Keane, K1MK. The 30.4 nm resonance line is the best indicator for gauging the state of ionization of the ionosphere. What I would like to point out is the future of the Solar and Heliospheric Observatory (SOHO). SOHO was originally intended to last a few years when it was launched in 1995 and has lasted four times as long. It has done yeoman's service and done more to increase man's understanding of the Sun than any other space-based solar observatory. But it is getting long in the tooth and in need of replacement." 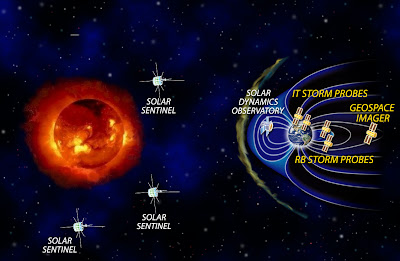 He goes on to say, "To that end, NASA will launch a replacement satellite observatory called the Solar Dynamics Observatory (SDO). It is currently undergoing final assembly at NASA's Goddard Space Flight Center near Greenbelt, Maryland. Launch date is currently scheduled for no earlier than December 1, 2008 and it is expected to be operational within 90 days of launch. "The assembly team is in the early stages of construction with the first of three instruments delivered last month. That instrument is the Extreme Ultraviolet Variability Experiment (EVE). It is the analogous instrument to the SEM on SOHO. When you check out the specs of the new instrument, it is readily apparent the jump in capability the new instrument offers over the SEM on SOHO." 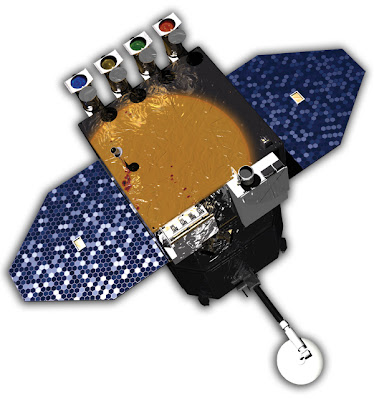 Solar Dynamics Observatory
He continues, "Unlike SOHO, SDO will be placed into a geosynchronous orbit around the Earth. That is to provide better communications to handle the higher data rate coming from the new satellite. Images that are updated every five minutes on SOHO will be updated once a second on SDO. SOHO orbits the Sun at a Lagrange point, one million miles from Earth. This provides uninterrupted observation of the Sun. SDO will have two 90 day periods per year where its observations will be interrupted for a maximum of 72 minutes while it passes behind the Earth."
Bob ends by saying, "You might want to remind your readers, especially the younger ones, that while conditions may be challenging right now they will get better. And the set of new tools coming online in the next year and a half will provide us with the information to exploit F layer ionospheric propagation like never before, regardless of what the sunspot count at the peak of Cycle 24."

Thanks, Bob for the great information.

This week several people wrote in about an article from NASA about ion plumes, titled "Strange Space Weather Over Africa." You can read it at http://tinyurl.com/3yyok8.

Jose Nunes, CT1BOH of Lisbon, Portugal sent in a link to an article about the cycle minimum at, http://sohowww.nascom.nasa.gov/pickoftheweek/old/05oct2007.

Next week we hope to have more details on some unusual long path propagation on 80 meters from the West Coast to South Africa, while both ends of the path were in daylight. Don't forget ARRL Phone Sweepstakes this weekend. Conditions should be fine for this domestic contest.

If you would like to make a comment or have a tip for our readers, email the author at, k7ra@arrl.net.